Sam Chapin
Eustis, Florida, United States
I am an old guy that has sailed Lasers for a few years, and do it locally, and encourage others to join us. We have a good little group going -- have some extra boats to loan and invite you to come and join us on Lake Eustis in central Florida. Look for me at Lake Eustis Sailing Club and check the web site. Check out these blogs http://howtosailthelaser.blogspot.com http://eustislaser.blogspot.com http://centralfloridasailing.blogspot.com 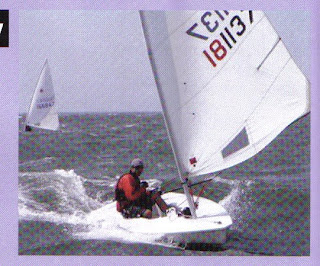 November 22 and 23, 2008 participation was down a little but we had a great weekend. Cool and windy on Saturday. Sam chickened out and went on Race Committee for a little different look. Rob had put the marks out. That worked well. Randy Rea came over to check out the windy conditions.
Watching from the committee boat 1) when the wind is up boat handling is different. 2) Faster. 3) more physical. 4) Randy is better. Starts were at the boat end favored and only one did Randy get challenged when Rob got underneath him. We had five out for Sunday, but Craig Yates had a capsize that torn loose the gooseneck and he was out of the last several races. Marc Solas was game. Sailed one race and decided he needed more practice on a calmer day.
Randy won six of the eight races. Arlen, Rob asked for a triangle course about half way through so we had that in your honor. Rob won one race and Alejandro won one, but Rob had a bunch of seconds and was ahead for the LESC members. I was really proud of Alejandro as he was sailing his full rig and giving Rob 30 pounds and maybe more to Randy. He had the vang sheeting bending the boom good and was sailing fast and low, and really smoking on the reaches. Randy didn’t bring the Eric’s, but they are coming back and are fixing up a boat for Eric Sr as Eric Jr already has one.
Saturday Charlies Jensen and Yost came by to see who was going out. Jensen is making arrangement to pick up Chutzpah to glue it back together and give us another boat. C. Yost is working on his stretches to get his muscles back in shape.
On Sunday we had seven for six races. Conner Kechriotis had his new boat put together and got out for the last five races with his new radial sail. In the second race he corrected out to second place (bumped Sam out of second). The third race he won outright. Then he dropped back to 5-5 and 4 to finish fourth for the day. When we get Caroline Ladley and Ben Getchell back our youth program should be ready to take off.
Jennifer Burno and Sam were looking at each other on a lot of the races and were the only ones once to figure out starting at the buoy end after the big wind shift. (Always check the line.) Jennifer should have won that race but sailed into a hole right at the finish line and Sam got across first. It doesn’t hurt to have a family member on the RC. Now that Jennifer is about to win races, no more "be nice to the lady" stuff.
Jerry Beck got up on Sunday. We usually see him on Saturday with the youth program, but he had Boy Scout camp out on Saturday. We were glad to see him and he got caught in all the wind shifts and holes that we had. Really tough to shift gears when you are just getting started again.
Marc Solas was out again, smiling and having a good time. He is sailing better and getting closer to everyone and we love it.
On Sunday Alejandro had a 1-1-2-3-3-1 and Rob had 2-4-3-4-1-2 and when we added the Saturday score Alejandro had 32 and Rob 33 after 14 races over the weekend. Wow! The next person is 35 points down.
Overall we had 9 sailors over the weekend plus Tom Doyle was sailing his MX - ray. That is the little red flat boat that is in the Northeast corner of the club. It rates a little faster than a Laser, has an unstayed mast, cat rig, and a spinnaker. Tom is a big boat sailor converting to a little thing. He has been invited to come and race with us – he is practicing his boat handling. He has also been invited to do the Laser thing with us.
Then Sunday afternoon Sherry Magno, who has been skippering big boats in the Virgin Islands for a number of years, was out in a 4.7 getting used to steering with a little stick at the back of the boat. She had a good time and is coming back for more.
Vince Renzoni visited late Saturday. He has a Laser down at Lake Placid and has been sailing it in preparation to joining and sailing with us.
Ex-mayor and soon to be ex- Eustis commissioner Dr. Jim Rotella dodged a Laser sail and ended up crewing for Richard Kinnie on Saturday in the C scow. When the new commission takes over he will have a little more time and we will get him on days the C scows aren’t sailing. He is another that need converting from big boat sailing to steering with a stick and leaning out to balance the boat. It is a lot easier to move the other way– little boat to big boat.
Posted by Sam Chapin at 8:03 PM No comments: 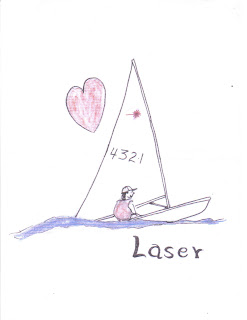 Posted by Sam Chapin at 9:04 PM No comments:

Dear Lake Eustis Sailing Club Members,
Our local newspapers are trying to get our news in. The Daily Commercial got the two weeks ago story in and the Lake edition of the Sentinel put in this past weeks news.
We appreciate their help.
This is a tough time for newspapers to find their way, but we need them for local news. TV and internet do well for national and international– but then you have to sit through the ads and the come on stuff. With the paper - read the first paragraph and get a summary. If you want all the details read on or pass to the next section. Then there is the funnies, editorial, cartoon and local ads.
Don’t forget to enjoy the local paper and look for your name or your neighbors.
This past weekend.
Sailors of the Lake Eustis Sailing Club had a variety of winds over the weekend, with high winds on Saturday and light shifty winds on Sunday. Dave Moring mastered both conditions with two wins in the two races on Saturday sailing the C scow, a 20 foot boat and winning the two races on Sunday in the 16 foot MC scow. Second place on Saturday in the C scow was Scott Tillema and Don Fancher was third.
The Saturday MC scow races were won by Geoff Moehl. John Houck was second and David Leather was third.
The MC races on Sunday were both won by Dave Moring. Second was Don Houck and third was Robert Newland .
Sunday Flying Scot races were won by Ray Laguna and second was Randy Boekema.
The Wayfarer races on Sunday were won by James McIntyre, second was Ted Benedict and third was Jim Lingeman.
In the Laser class Randy Rea of Crystal River won six of the eight races on Saturday, but didn’t race on Sunday so he dropped back to third for the weekend. Alejandro Illera won big enough on Sunday to put him ahead for the weekend with Robb Krentel in second. Jennifer Bruno was the first woman and Conner Kechriotis was the first youth.
Next club races will be in two weeks. The Optimist pram sailing will continue on Saturday morning and afternoon. The high school sailing continues on Wednesday and Saturday afternoons.
Posted by Sam Chapin at 8:48 PM No comments: 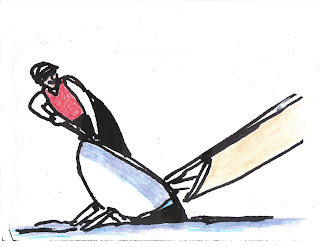 These are some of the entries in the T shirt contest. Actually I have ordered some of the "big wave", can you guess which one that is?

Design one to enter!!! 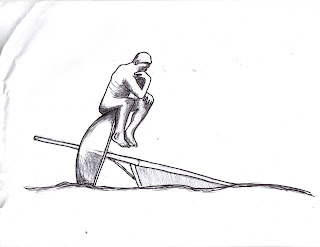 Maybe this is the one that Arlen wanted.
Posted by Sam Chapin at 6:12 PM No comments: 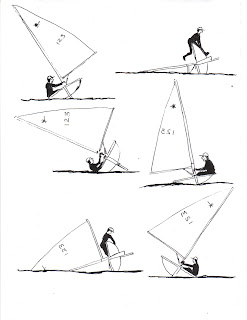 Have you gybed this way? Another T shirt entry.
Posted by Sam Chapin at 6:09 PM 1 comment: 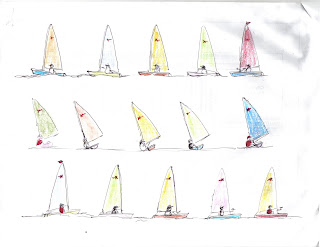 Maybe too many colors for a T shirt.
Posted by Sam Chapin at 6:07 PM No comments: 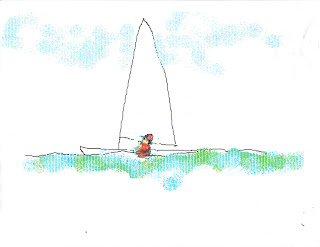 Another T shirt entry.
Posted by Sam Chapin at 6:04 PM No comments:

Labels: an entry in the Tshirt contest.

This is an unusually cool day in November and the bunch of people invited to sail Lasers this afternoon all chickened out. The high school guys-- five of them -- had a good workout and Sam sailed a little. None of the girls showed up-- basketball for the Ladelys. Just too bad about the rest of you.
Posted by Sam Chapin at 4:09 PM No comments:

Host club members top the entries in the South East Regional Championships of the MC Scows and the Melges 17 scows at the Lake Eustis Sailing Club this past weekend. The South East Region runs from Texas to North Carolina but the regatta is "open", so boats from Michigan and Wisconsin were also present in the 37 boats entered.
First place in the MC scows was David Moring of Ocala but a LESC member. Second place was Jon Pomerleau of Winter Park, but a LESC member. Third place was Eric Oppen of Pewaukee, Wisconsin. Mark Marenokos from Charleston, South Carolina was the first "master" ( over 50) and the eleventh overall. The first "grand master" (over 60) was Lenny Krancheck of Charleston. Jack Kern from Texas was the first "mega master" (over 70) and fourth over all. Ben Getchell of Eustis was the first youth and seventeenth over all.
In the Melges 17 scow races Mary Ann Ward of Cocoa Beach and LESC member was first with crew, Ross Blair. She grew up sailing on Lake Eustis as Mary Ann Erban. Second was Jim Wilgard of Glenn Lake, Michigan with crew, Brian McMurray. Third was Benjamin Birver of Pewaukee, Wisconsin with crew, Sprink Drake.
High winds and waves on Saturday with the arrival of the cold front caused cancellation of the third race with only a few capsizes.
Next weekend will see the regular club racing on MC scows, Flying Scots, Wayfarers, and Lasers with Optimist Pram classes for youth and 420 sailing for high school teams on Saturday.
Posted by Sam Chapin at 4:08 PM No comments: 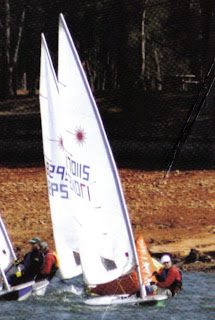 This is the Blog for the Lake Eustis Laser Fleet-- that is the sailboat that is most popular worldwide for youth, women and men, six contents and 122 countries.
We sail and race on Lake Eustis at Lake Eustis Sailing Club in Eustis, Florida. Check the LESC web site for more detailed information.
We are looking for more Laser sailors and boats to race with us. We usually have 5 to 12 boats racing with us and sailors from 10 to 80 years of age. Laser Full rig, radial and 4.7 are sailed and we try to do the Portsmouth corrected time thing.
If you want to sail with us get in touch or show up.
I will try to keep the race results posted .
Sam
11-15-08 The MC regatta is going on, but Sam got Dean Parsons, a big boat sailor from Maine, out on 4.7 and getting him to use the tiller extension and to turn forward in tacks. Lots of fun. Wind came up in the afternoon. Blew the third race of the MCs out. While Jerry Beck and Sam took turns planing the 4.7 around the Optis and 420s had a great sail. If you didn't come you missed a lot of excitement.
Posted by Sam Chapin at 9:14 PM No comments: